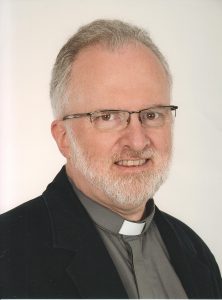 As a United Reformed Minister (ordained in 1984) I combine the half-time role of Synod Ecumenical Officer with that of an authorised presbyter in the South Kent Methodist Circuit.

I responded to a call to come to Kent in 2012, moving here from Godalming, Surrey where I was minister of the United Church.  Before that I had served in St Albans, Herts where I was also an Ecumenical Chaplain at the Cathedral & Abbey Church; and before that in Farnham, Surrey and Bordon, Hants.  Opportunities for overseas links with Hungary, the USA, The Gambia, and Palestine/Israel have featured in these ministries.

In the South Kent Circuit I work in collaborative ministry with a Methodist colleague (Revd Helen Hollands).  In addition to the two congregations of the United Church Ashford, which are Methodist & United Reformed, I also serve at Charing and Tenterden Methodist churches.

With the United Reformed Pastoral Committee for the East Kent area my role is to encourage the provision of pastoral support to 19 congregations, mostly United Reformed, but including 8 Local Ecumenical Partnerships.

I am the URC Southern Synod Ecumenical Development Officer, from March 2018.  The job purpose is “To help equip local churches for ecumenical encounter that “they may all be one” (John 17:21).  The Southern Synod covers “South London to Kent to parts of Surrey and Sussex – we are God’s people in 160 local congregations committed to supporting and resourcing one another to be faithful followers of Jesus Christ.”

I am married to Rowena, who is Resources Director for Mind in Camden.  Outside our work we are members of Ashford Astronomical Society, enjoy bread making and love to eat vegetarian food as part of a non-violent way of life and of thinking.